McKinsey study: When will the pandemic end? (1/2)

In 1920, a world tired of World War I and sick with the 1918 influenza pandemic tried desperately to overcome the fighting and tragedy and start again. People were looking for a "return to normal," as Warren G. Harding once said. Today, almost every country is in a similar situation.

Read an analysis and predictions by experts from one of the world's leading consulting companies, McKinsey.

From the experts' point of view, there are two important definitions of the "end" of an existing pandemic, each with a separate timeline:

The new normal will not look like the old one: it may differ in a surprising way, with unexpected contours. Getting there will be a gradual process, but in the end everything we know - air transport, shops, functioning factories or full restaurants - will again operate fully.

Both ends are related, but not linearly. The transition to normal occurs at the latest after immunity of the entire population has been achieved. In regions with strong public health responses, normality is likely to come significantly earlier before the epidemiological end of the pandemic.

The timeline for achieving goals will vary by location. This article explains the criteria that will be key factors in determining when each goal is achieved.

In the United States and most other developed economies, the epidemiological target is most likely to be reached in the third or fourth quarter of 2021, with the potential to transition to normal sooner - probably in the first or second quarter of 2021. Most countries are impatient, knowing that the longer it takes to remove the constraints on our economies, the greater the economic damage will be.

Most countries have postponed hopes of achieving population immunity until the vaccine arrives. Once widespread immunity is achieved, ongoing public health interventions for COVID-19 can be halted without fear of resumption. The timing of the endpoint will vary by country and will be affected by a number of factors:

Consider the first and most important variables: the arrival of vaccines, their efficacy, and their acceptance. Different combinations of these two factors will drive different levels of immunity, indicating the extent of innate immunity that will be required to achieve population immunity under each scenario.

Based on an analysis of the current state of the variables and their likely progress in the coming months, McKinsey experts estimate that the most likely time to achieve area immunity is the third or fourth quarter of 2021. The case study focused primarily on the United States. which is inducing herd immunity. According to experts, this could happen within six months.

In the worst case scenario, experts say, the United States could be fighting a pandemic long-term until 2023 and beyond. This scenario would occur if factors such as the low efficacy of vaccines and the short duration of innate immunity were opposed. 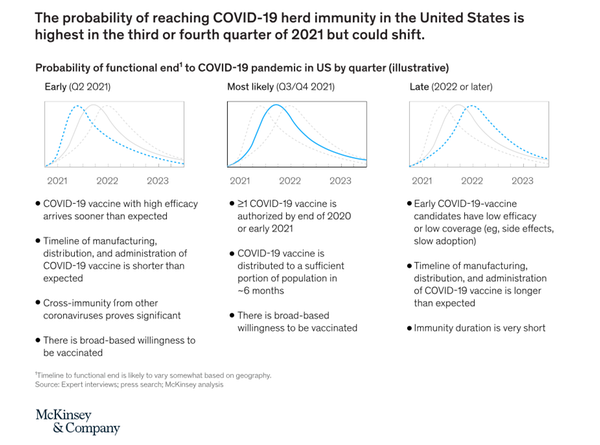 According to McKinsey analysts, the paths to population immunity in other advanced economies are also likely to be similar to those in the United States. Timelines will vary depending on differences in access to and implementation of vaccines and on levels of innate immunity, possibly also on levels of cross-immunity and previous coverage by other vaccines such as BCG.

Even if some localities achieve herd immunity, local sites affected by COVID-19 are likely to remain worldwide, such as in war-affected areas or in communities with persistently low vaccine uptake. In such areas, COVID-19 may be analogous to measles until the population becomes immune: it is not a daily threat to most people, but a permanent risk.

Widespread immunity will not mean the complete cessation of all public health interventions. Regular revaccination may be required to maintain immunity and ongoing monitoring of COVID-19 will be necessary. However, the group's immunity would mean the emergency measures currently in force in many countries could be lifted.

The decisive factor will be the speed with which governments release public health measures. Many governments use packages of measures aimed at minimising the number of cases of COVID-19 and excessive mortality while maximising the social and economic level of freedom.

The continuation of this article will focus on the second scenario: the transition to normal.