McKinsey Study: When will the pandemic end? (2/2)

The first part of the article presented the conclusions of an analytical study by experts from one of the world's leading consulting companies, McKinsey. The focus was mainly on the analysis of the epidemiological endpoint.

This continuation focuses on the second possible scenario: transition to a normal state.

This second endpoint of the pandemic may be reached before the epidemiological endpoint. McKinsey analysts estimate the most likely time for this to occur is the first or second quarter of 2021 in the United States and other advanced economies. Reduced mortality will be a key factor.

Society has become accustomed to monitoring the number of cases infected with COVID-19. However, this number depends mainly on the fact that people die from the disease and those who survive it may have long-term health consequences after infection. This is an area of ​​scientific uncertainty, but there are concerns that some recovered patients will face long-term effects.

Most countries have made significant progress in reducing COVID-19-related deaths and hospitalisation cases. Some are close to eliminating excessive mortality. These results have generally been achieved through a combination of moderately effective interventions rather than a single "big bang".

The transition to the next normal, in whatever form, will take place gradually, when people are confident they can do what they used to do without endangering themselves or others. Gaining this trust will require continuing to reduce mortality and complications, as well as further scientific studies on the long-term health consequences for recovered patients. Once confidence is restored and people are again filling restaurants, theatres and sports venues, they will also fly overseas (except to the most risky countries) and receive routine medical care as before the pandemic.

The timing of such a transition will depend on progress towards widespread immunity and the effectiveness of the country's public health response. The transitions will be gradual. In some localities, they have already begun and in most countries they could have made good progress by the first or second quarter of 2021. Due to the interconnected nature of the global economy, the time schedules of individual countries are not completely independent of one another.

Achieving this will require significant progress on the epidemiological endpoint, including an effective vaccine that will be approved by an emergency authorisation in the fourth quarter of 2020 or the first quarter of 2021, followed by the smooth introduction and acceptance of high-risk populations. Favourable findings on innate immunity and cross-immunity would help speed up timelines. Five other criteria will also contribute to the transition to the form of normality, the more of which are achieved, the faster the milestone is likely to be reached. 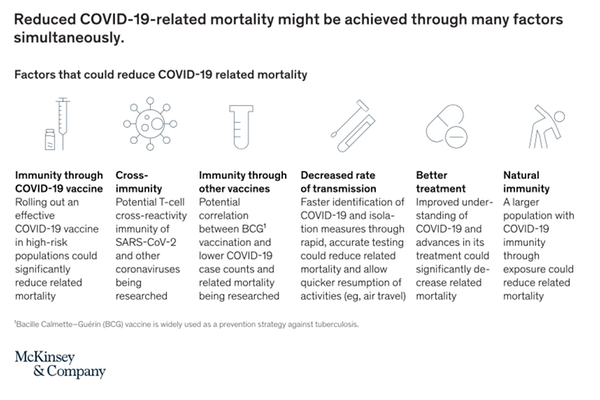 The epidemiological and normal end of the COVID-19 pandemic are important. The transition to the next normal will mark an important social and economic milestone, and the population's immunity will again be the definitive end of the pandemic.

Although the transition to normal may be achieved earlier in the United States, it appears that the epidemiological endpoint is most likely to be reached in the second half of 2021. Other advanced economies are likely to move along similar timelines.